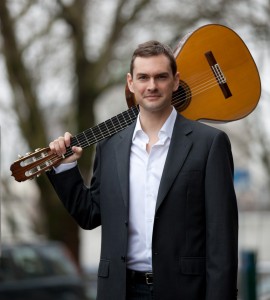 “I was completely bowled over by Allen Mathews…. His artistry is amazing…incredibly fluent and sensitive playing…”  Maxine Frost, KING FM, Seattle Classical Radio

Allen Mathews is a guitarist living in Portland, Oregon.  Specializing in classical, Spanish, and Brazilian music, he has been welcomed as a performer in 6 countries, and throughout the US.

Allen taught guitar at Reed College and Oregon Episcopal School in Portland.  For three years he taught classical guitar and group guitar classes at Lewis and Clark College in Portland.  He has been a guest instructor and clinician at colleges and universities around the country.

Allen  Mathews has a B.A. in Guitar Performance from Fort Lewis College in Durango, CO, and has studied with many fine musicians in the US and Brazil, where he lived for a time.  His collaborations have included a duo with guitar and percussion, a duo with guitar and mandolin, and a trio with guitar, violin and cello.  Previously he has collaborated with theater productions, opera, choir, dance, and symphonic wind band.  He continues regular coaching with renowned former concert pianist Mark Westcott.